Five Communities of the Damned

Study up on urban design and you’ll find that there are reasons that certain types of communities are prone to tragic fortunes. The ominous circumstances each of these communities must deal with unfortunately breed a latent collective hysteria, paranoia, and madness that ultimately infect all of its residents one way or another.   Naturally, those dormant feelings of horror only need a little push to surge over into complete chaos. We’ll start with the most obvious dark community of them all: Aside from the fact that the class structure of Bram Stoker’s Dracula hadn’t changed in ages (with Count Dracula living in his high castle while the village people hung out in their slums), Transylvania is a place with so few community ties and so little collectiveness that villagers somehow expect it when young girls are taken to the castle and never return. On the plus side, you know that it’s a place where you can’t really be killed, and the local academy of Scholomance has courses in “black arts” in case you want to try and fight off the bats, wolves or whatever else the vampires can turn into in the surrounding woods. There clearly isn’t enough funding for a department of public safety. Not only does the master planning developer have no respect for history, burial grounds or historical restoration, but he decides that what Southern California needs more than anything is more mindless sprawl. So naturally, the characters fit themselves into the perceived comfort of sprawl naturally: they hang out, watch TV, go to therapy and constantly cope. And these are all things they’re perfectly comfortable doing separately from the fact that there are ghosts haunting everyone’s homes and stealing their children through televisions and closets. UC Irvine parapsychologists could tell it was a trapped neighborhood: even the ghosts wanted to leave but couldn’t. But isn’t that really just part of the endless cycle of unsustainable sprawl? Once you’re in, the costs of living there keep you from finding a way out. Apparently it’s true even after death. 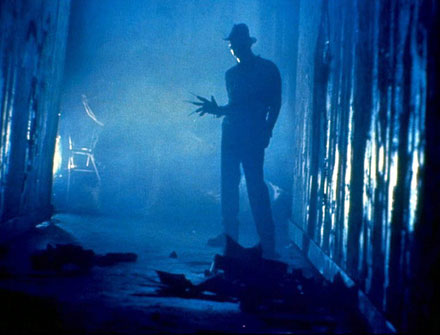 Freddie Krueger aside, any community that’s vengeful enough to collectively burn a criminal alive for the sake of vengeance alone is a scary one to live in. Just as importantly, Elm Street is a terribly droll, lackluster suburb of braindead sprawl that of course the community is going to be repressed enough to do backlash-y things like burn a guy alive! Not that murdering children in their dreams is “just desserts,” but the reticent cookie-cutter community certainly gives Krueger plenty to work with. Bed sheets, jump rope, lawn mowers, pools, waterbeds, and (most stupidly, I think) comic books are all really plain things that feed into the greater point that the mundane nature of the everyday may, in fact, be killing us. Regardless, these days Elm Street’s forthright style of sprawl is probably suffering immensely from heavy foreclosures. Guess Freddie’s just going to have to settle for murdering squatters for a while.

George Romero’s version of rural America is a scary place to live even without the threat of slowly-lurching zombie apocalypse. Communities of people don’t trust each other, and seem to live so far away from each other that there are literally no opportunities to look for or even expect safe haven with your neighbors. More importantly, transportation options are frightfully limited. In most cases, people only have one car and when that runs out of gas, you better hope you can get more soon because you’ll be surrounded and devoured in no time otherwise. Imagine what a solar-powered train could do? Or even cars that ran at hundreds of miles per gallon! Further, I find that most rural places in real life America are full of honest and straightforward people. George Romero’s Rural America, on the other hand, is full of liars who get bit by zombies but don’t mention anything until they’re almost completely transformed and end up taking a few people out with them. It’s cool if you want to stay alive, but word to the wise: don’t lie about getting bitten during a zombie apocalypse.

Although I could just as easily add any of H.P. Lovecraft’s cities to this list (Dunwich and the Library City of the Great Race also come to mind right away), ultimately his town of Arkham in the Miskatonic River Valley in Massachusetts is the epicenter of the horror universe: its rich with as many socio-economic dilemmas as it has dark and deeply disturbing secrets.  Homes in Arkham are dilapidated, with shoddy Georgian balustrades unevenly paired with the gambrel roofs of re-fitted barns, but the architecture is only a reflection of the lives of the poor, afflicted and very superstitious residents (who have much much bigger problems than their community’s design consistency). The underprivileged population are used to their children disappearing for the privileged to ritualistically sacrifice to awaken ancient malevolent gods onto Earth. The overbearing fear of being social outcasts causes others to forcefully suppress or ignore their particularly violent mental disorders until it’s too late. It is a place where one of your Miskatonic University professors is bringing versions of people back from the dead, while another is swapping minds with an ancient race of violent, omnipotent time traveling aliens. It is a place where the Arkham Historical Society hides secrets about your past so fundamentally disturbing you may not know how to continue living as you did before you knew them. Witches have cursed it, residents spontaneously disappear or go mad, unrecognizable creatures fly furiously through the skies at night, amorphous, unnameable figures mutilate people in its outskirts, and both mass sacrifices and mass suicides have all occurred there at one time or another on behalf of prehistoric deities that, when they finally appear, will bring total destruction to us all.

If you can think of another one I might've forgotten or not been aware of, let me know!